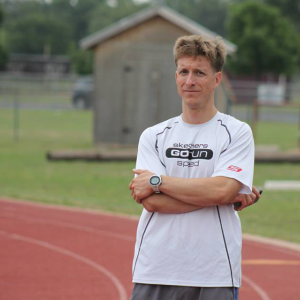 For a brief period in the late 2000s, George Perry thought he wanted to be a lawyer. Bored in the months between finishing his time in the United States Navy and starting law school, Perry answered a Craig’s List ad to lead a morning bootcamp. That led him to the fields of exercise physiology and sports science. He became a personal trainer and rehabilitation coach, while also discovering he was a reasonably competitive age-group distance runner.

To this day, he doesn’t know if he should curse or thank the people who guided those first few years. But since it got him out of law school after his 1L year and to Texas to study Sports Science and Nutrition at the University of Texas at Austin, we’ll go with thank.

From 2013 - 2017 Perry coached and managed the Austin Track Club, training middle-distance runners who went on to compete across the United States and Canada, including the USA Track & Field Indoor Championships.

His greater successes, though, have come on the management and entrepreneurial side of sports. His complete lack of personal history in track & field prior to kicking in the door has been invaluable in developing athletics and athletes into a professional sports culture worthy of fans and sponsors. Although he moved to Houston with no intention of working in athletics, his love of coaching, his belief in the potential for the sport and the unwavering encouragement of his mentor prevented him from staying away for long.

He values an athlete’s ambition and intensity above all else. Whether the goal is a national championship, a Boston Marathon qualifier or rehab and return-to-play for any level, he enjoys working with any athlete in any sport who can match his passion for performance.

Perry grew up in Buffalo, NY, and graduated from Boston University before serving as a Submarine Warfare Officer in the US Navy. He has a slight obsession for Chelsea Football Club and beagles.